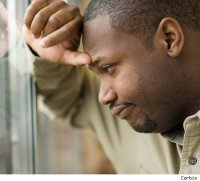 I just wanted to put this out there today. Women just because he isn’t talking, when he has things on his mind doesn’t mean he doesn’t care.

I know a lot of times a man can seem like he is on hush mode with us. And a lot of times he is. However, this does not always mean he is out there doing dirt. Men don’t wear their emotions on their sleeves like we do. Well, let’s face it, ladies, we wear our emotions everywhere and are not afraid to let it be known how we truly feel when we want to.

If we are having a bad day, going through an issue, or whatever else, we are going to vent our frustrations to our man. However, that is not always true for them. They a lot of times like to fix it without involving us. They try to keep us from worrying. Even though we feel as if they are trying to keep us out, most of the time they feel as if they are trying to protect us from unnecessary worry. Think about it~Isisn’t his job to be our protector?

And if you don’t nag him about it, whatever the issue was or what he had been feeling at that time, he will eventually tell you. If he hasn’t done anything to betray your trust, then you should trust him enough to know he will tell you on his own time. As long as he is doing other stuff to show you that he cares and loves you, then you can relax a little. I was always told that actions speak louder than words anyway, so just think about that the next time you want to jump down his throat when he is in hush mode. #IJS

This site uses Akismet to reduce spam. Learn how your comment data is processed.

Spice Up Your Life